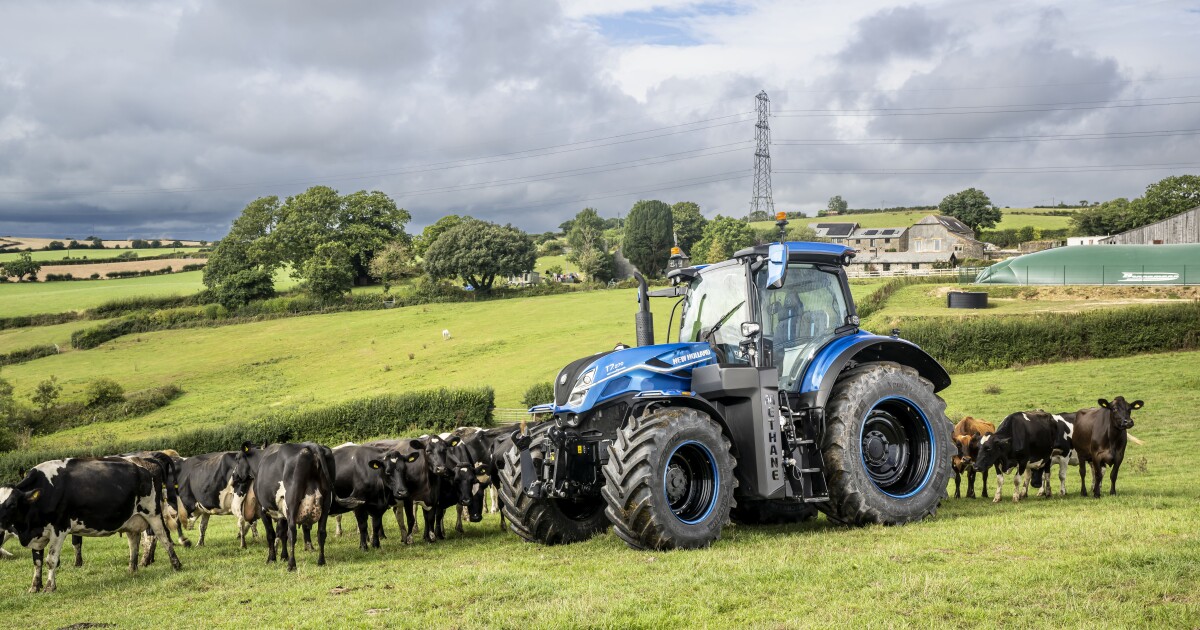 New Holland Agriculture has announced a new tractor designed to run on fuel created on-site from cow manure. The T7 Methane Power LNG offers the same power and torque as a diesel tractor, but is part of a system that can significantly reduce emissions.

The system, on which New Holland has partnered with British company Bennamann, works something like this: farmers collect as much cow poo as possible as slurry, and instead of using it directly as fertilizer, they pump it into large reservoirs or covered lagoons. . Anaerobic organisms eat this thick, lumpy drink and produce a biogas that mainly contains methane.

This gas is collected and purified into biomethane, which can be used around the farm where natural gas would normally be used. Or, it can be compressed and liquefied into LNG, or liquefied natural gas, which must be stored in cryogenic tanks at -162°C (-260°F). This can be sold as a product or used directly to run specially designed engines. The solid remainder of the waste is used as fertilizer.

The T7 Methane Power LNG is currently a concept tractor, but according to New Holland it is the world’s first tractor designed to run on LNG, allowing farmers to create their own fuel.

According to this 2018 study in Applied Energy, producing and selling biomethane only starts to make economic sense if you’re running more than about 3,600 head of livestock, due to the expensive equipment needed for purification and liquefaction. biogas. It looks like Bennamann has a solution here, in the form of mobile equipment that can travel from farm to farm, periodically converting captured biogas into LNG. The company also markets the cryogenic tank systems needed to maintain the temperature of LNG.

How much LNG can you expect from a certain number of cattle, and when does a system like this start to pay for itself? Well, it’s extremely variable, depending on the breed, what you feed them, how much time they spend in open pastures as opposed to barns or stables where their poop can easily be collected. So whether this type of system makes sense depends heavily on each individual operation, though Bennamann says his approach is designed to be cost-effective for “livestock farms of any size.”

Capturing all those methane emissions from cow poo, then turning it into LNG, then running it through a tractor engine isn’t an entirely clean process; the tractor exhaust gases still contain carbon dioxide. But by effectively capturing a large amount of methane emissions and turning them into carbon dioxide emissions, as well as preventing the burning of fossil fuels that would otherwise run tractors, the environmental results are significantly better. “The CO2 reduction for a farm of 120 cows is potentially equivalent to around 100 Western households,” according to New Holland.

Check out a video below.